lurkeraspect84 said:
After waiting so long, I really hope it's a good game.
Click to expand...

I've been watching the Stanley Cup. Games 1 and 2 were in Denver with 3 days between games. Game 3 was in Tampa, with a 2 day break and they had to travel. Who are the logistical geniuses behind this? Someone make it make sense. The only reason I can think of would be the venues were previously booked for other events.. concerts and what not. Otherwise that's just pure idiocy.
Reactions: lurkeraspect84

Kevin Bryan said:
The back and forth between him and Barkley had me rolling. Especially when Barkley was on Cal's show talking about Green: "He’s the worst member of the boy band who doesn’t realize he’s standing next to Timberlake. When the girls are throwing panties at his head, he’s going to get hit by some drive-by panties, but they’re really meant for Timberlake.” 😂
Click to expand...

I was watching the end of game 6 of the 2013 NBA Finals. And wow! The Heat were lucky AF to pull that off.

If any of these notable plays don't go in favor of the Heat, they most likely lose game 6, and the Spurs walk away with the title.

1. With about 40 seconds left LBJ turned the ball over. The spurs had a fastbreak opportunity and Ray Allen fouled Ginobili without making a play at the ball. Seems like this could have been an intentional foul. 2. With 25 seconds remaining in regulation, LBJ misses a three-pointer and three, yes three, of the Spurs are right there for the rebound (Diaw, Leonard, Ginboili). Leonard touches it first - and then it deflects off of Diaw's hand and directly over to Ray Allen. Crazy thing is, the Spurs were up 94-89. Game is absolutely over IF this rebound is secured. And it should have been... the Spurs had the 3 closest players to the ball. 3. Thought Ray Allen fouled Ginobili. Possibly more than once. You could argue the view of the refs was obstructed. And also it's tough to call a possibly game-deciding call in the final seconds. But, this looks like a foul. The Heat were up 101-100 in OT with about 5 seconds left when this play occurred. So, you could say maybe he misses a free throw... or maybe the Heat win on a last-second shot. Either way, this was a HUGE no-call. Bonus point: Looks like Chris Bosh may have gotten away with a hip check on Danny Green in the final seconds of OT. Now, the Heat were up by the 3, so that foul in the worst-case scenario simply leads to another OT. 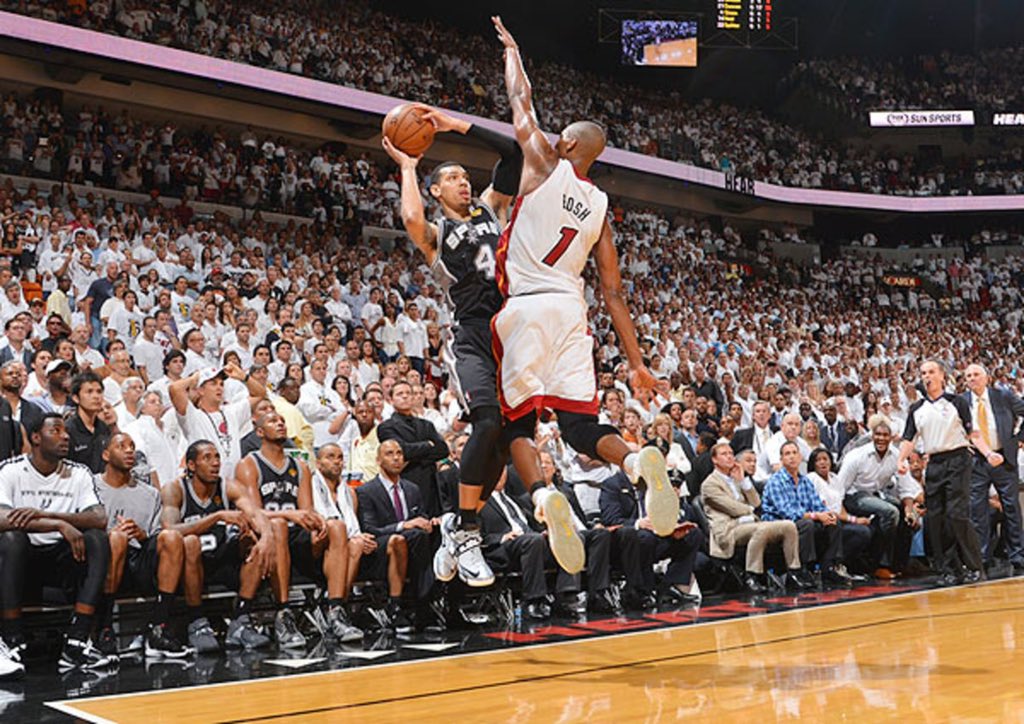 Also, if Pop kept Duncan in the game, maybe they wouldn't have given up those costly offensive rebounds. LBJ and Allen both made three pointers in the final minute when the Spurs failed to grab the board. Duncan was on the bench for both plays.
Reactions: lurkeraspect84 and GE Nole

dukedevilz said:
Also, if Pop kept Duncan in the game, maybe they wouldn't have given up those costly offensive rebounds. LBJ and Allen both made three pointers in the final minute when the Spurs failed to grab the board. Duncan was on the bench for both plays.
Click to expand...

Poppovich with a terrible decision to take out Tim.
Reactions: dukedevilz

Perfect timing. Colorado tied it in the 3rd after the CWS game is over.

lurkeraspect84 said:
Perfect timing. Colorado tied it in the 3rd after the CWS game is over.
Click to expand...

OK here. I have no rooting interest in either team, just want a game 7.
Reactions: Kevin Bryan

I just love sports and watching players when in do or die moments.
Reactions: Mrs.Jeans15 and Kevin Bryan

lurkeraspect84 said:
OK here. I have no rooting interest in either team, just want a game 7.
Click to expand...

You are rooting for the Lightning now or I will ban you.

Kevin Bryan said:
You are rooting for the Lightning now or I will ban you.
Click to expand...

Do so many hockey players have beards b/c it's cold?

lurkeraspect84 said:
Do so many hockey players have beards b/c it's cold?
Click to expand...

Most of them have beards to distract people from their missing teeth.
Reactions: lurkeraspect84

Amazing how close they come to scoring.

Kevin Bryan said:
Most of them have beards to distract people from their missing teeth.
Click to expand...

Maybe it's just b/c I'm from Kentucky, but I celebrate my missing teeth.
Reactions: Kevin Bryan

Well that was stupid. Big difference being down 3-1 compared to 2-2. TB isn't winning 3 in a row against Colorado.
Reactions: lurkeraspect84

Just a matter of time with that power play.

It's night vs day going from baseball to hockey.

It's like watching two different sports.
Reactions: Kevin Bryan
You must log in or register to reply here.

Hey all… looking for some folks to test a basketball card game!