1) AUBURN Bruce Pearl and his staff crushed it in the portal, adding former UNC big man Walker Kessler, ex-Georgia wing K.D. Johnson and a pair of mid-major guards: Wendell Green Jr. (Eastern Kentucky) and Zep Jasper (College of Charleston). Kessler barely played in Chapel Hill last season, and he’s been one of the best defenders in the country for the Tigers, averaging 11.6 points, 8.5 boards and 4.6 blocks per game. Johnson has had basically the same production he did for Georgia last year, and he’s perfect for what Pearl has needed, and Green is a fearless scorer (12.7 ppg) who can really shoot it from deep. Jasper gives Auburn a floor leader, and he’s done a terrific job on the defensive end of the court.

2) KENTUCKY When John Calipari added disgruntled big man Oscar Tshiebwe at the break a year ago, no one saw the former West Virginia center being this dominant and productive in Lexington. He’s leading the country in rebounding (15.3), and has nearly doubled his scoring from 8.5 to 16.4 ppg. Davidson transfer Kellan Grady was brought in to add perimeter shooting, and he’s delivered, shooting a sizzling 44 percent from three while averaging 12.1 points per game. Georgia’s Sahvir Wheeler was added to give UK an experienced, pass-first point guard and the quick floor leader is averaging 7.2 assists, pushing the pace, and getting up into players on the defensive end. Local kid CJ Fredrick, who transferred from Iowa, hasn’t played due to injury but should step right into Grady’s role as a dead-eye shooter.

3) WAKE FOREST Steve Forbes hit the lottery with the portal. No one saw this coming with former Oklahoma guard Alondes Williams. He averaged 6.7 points, 2.8 rebounds and 1.3 assists last season for the Sooners. He’s putting up 19.8 points, 6.9 boards and 5.2 assists this year in the ACC. Indiana State transfer Jake LaRavia was productive at his previous stop, but it was with Indiana State in the Missouri Valley. LaRavia has increased his scoring from 12.3 to 14.4 points and his assists from 2.3 to 3.8. Wake also added Dallas Walton (7.9 ppg, 5.0 rpg) from Colorado and Khadim Sy (6.3 ppg, 4.3 rpg) from Ole Miss.

4) HOFSTRA Speedy Claxton and the Pride are 17-9 and 9-4 in the CAA due to an influx of impact transfers. It starts with former Oregon guard Aaron Estrada, who does it all for Hofstra, averaging 18.9 points, 5.6 rebounds and 4.8 assists. Arkansas transfer Abayomi Iyiola leads the team in rebounding (8.1) and also averages 7.6 points per contest. Darlinstone Dubar came from Iowa State and is averaging 12.2 points per game, and Zach Cooks arrived from NJIT and is putting up 13.8 points per game.

5) TEXAS TECH It appeared as though Mark Adams and his new staff reeled in the second-rate transfers, but these guys have thrived in their roles. Bryson Williams (UTEP) leads the team in scoring at 13.4 points, Davion Warren (Hampton) is averaging 10.1 points, Kevin Obanor (ORU) is at 9.8 points per game, Adonis Arms (Winthrop) is putting up 7.9 points and former Arizona forward Daniel Batcho (2.8 ppg) has been solid as well. The only miss was former Florida State guard Sardaar Calhoun, who has already left Lubbock after barely playing in eight games.

6) HOUSTON The Cougars lost their top two scorers, Marcus Sasser and Tramon Mark, for the season so others have had to step up. Former Texas Tech guard Kyler Edwards is averaging 13.8 points, and ex-UConn big man Josh Carlton has been a revelation. Carlton averages 11.7 points and 6.3 boards this season. Cal State Bakersfield transfer Taze Moore has also fit in well, averaging 9.0 points and nearly five boards per game.

7) BAYLOR Scott Drew and his staff only got one player from the portal, but it was a big one: Former Georgetown and Arizona point guard James Akinjo. There were a ton of point guards in the portal, and most of them haven’t worked out all that well. But Akinjo has been arguably the best, especially when he’s been healthy. Akinjo is averaging 13.1 points, 5.7 assists and has been exactly what the Bears need to make another run come March.

8) IOWA STATE The Cyclones are falling quickly, but they are still in the mix for an NCAA tourney bid — something no one expected this season under T.J. Otzelberger. Izaiah Brockington (17.0 ppg, 7.7 rpg) has been terrific coming over from Penn State, while ex-Minnesota wing Gabe Kalscheur (9.4 ppg) and former Kansas forward Tristan Enaruna (5.4 ppg) have been solid, and so has Caleb Grill (UNLV) and Aljaz Kunc (Washington State).

10) TOWSON Pat Skerry’s team was picked to be down at the bottom of the CAA, but the Tigers are now fighting for first place. It’s largely due to the transfer pickups of Cam Holden (UT Martin), Terry Nolan Jr. (GW) and Antonio Rizzuto (Albany). Holden is averaging 13.9 points and 7.9 boards, Nolan is averaging 10 points and 4.1 assists and Rizzuto is at 8.2 points per contest.

1) OREGON STATE This might have been the most underwhelming portaling job of anyone. Ahmad Rand came from Memphis and is averaging 5.1 points in 12.7 minutes. Tre’ Williams started 13 games and averaged 5.8 points at Minnesota a year ago, but is putting up 3.0 points in 15.5 minutes for the Beavers. Xzavier Malone-Key has played a dozen games this year, and averaged 3.8 points per game after averaging 12.3 at Fairleigh Dickinson, and Chol Marial hasn’t played after transferring from Maryland due to academics.

2) LOUISVILLE Former coach Chris Mack and his staff hit the portal last offseason, and it appeared as though he revamped his roster to add perimeter shooting and point-guard play. However, Matt Cross (Miami) and Noah Locke (Florida) haven’t done enough from deep, and the point-guard duo of Jarrod West (Marshall) and Mason Faulkner (Western Carolina) has struggled. The four players have combined to average just 27 points per game this season.

3) KANSAS Bill Self wanted to add speed in the backcourt, so he added Arizona State point guard Remy Martin and Drake guard Joseph Yesufu. Martin wasn’t going to average 19 points per game, as he did the past two years in Tempe with complete freedom, but he’s mostly been a non-factor in Lawrence, averaging 8.2 points and 2.9 assists. Yesufu was terrific in the NCAA tourney last year, but he’s only averaging 2.2 points in nine minutes per contest for the Jayhawks. Jalen Coleman-Lands was brought in as an insurance policy in case Ochai Agbaji left for the NBA, and the well-traveled wing is averaging 4.3 points in about 10 minutes a game.

4) GEORGIA I know the numbers are there for some of these guys, but the wins are not. The Bulldogs are 6-19 overall and have just one win in SEC play. Georgia lost K.D. Johnson (Auburn), Sahvir Wheeler (Kentucky), Toumani Camara (Dayton), Justin Kier (Arizona) and Tye ***an (Ole Miss). So Tom Crean added Braelen Bridges (12.6 ppg) from UIC, Aaron Cook (10.6 ppg) from Gonzaga, Noah Baumann (8.7 ppg) from USC and Jabri Abdur-Rahim (7.5 ppg) from Virginia. Jailyn Ingram also averaged 10.7 points, but only played nine games due to injury after coming over from FAU.

5) MISSISSIPPI STATE I expected an NCAA tourney appearance from this group. Ben Howland brought in a productive, experienced big man in Garrison Brooks (11.5 ppg, 6.9 rpg) from North Carolina, former Memphis forward D.J. Jeffries (9.7 ppg), ex-NC State guard Shakeel Moore (9.4 ppg) and Rocket Watts (4.4 ppg) from Michigan State. These guys have been solid as a group, but the Bulldogs are just 14-10 overall and 5-6 in SEC play.

6) NORTH CAROLINA There were some that thought Hubert Davis crushed it in the portal, landing a pair of proven frontcourt players in Dawson Garcia (Marquette) and Brady Manek (Oklahoma), as well as seldom-used Justin McKoy from Virginia. Garcia averaged 9.0 points before shutting it down to tend to his family, Manek has been solid on the offensive end of the floor (13.8 ppg, 40% percent from three), but struggles on defense, and McKoy is only playing 7.5 minutes per game.

7) TEXAS We overrated Chris Beard’s haul in the portal. At least I did. The Longhorns are still a Top 25 team, but none of the transfers lived up to the hype. Former Utah forward Timmy Allen (11.6 ppg, 6.6 rpg) has been the best of a six-man group that also includes ex-Minnesota guard Marcus Carr (10.9 ppg), former UMass big man Tre Mitchell (8.7 ppg) and ex-Creighton forward Christian Bishop (6.4 ppg). Vandy transfer Dylan Disu hasn’t given the Longhorns much at all, even since he came back from an injury, and Devin Askew (Kentucky) has struggled on the offensive end, averaging 2.0 points.

8) WEST VIRGINIA Bob Huggins and the Mountaineers grabbed three guys from the portal: Malik Curry, Pauly Paulicap and Dimon Carrigan. The trio have combined to average 13.2 points per game. The Mountaineers also didn’t address their point guard concerns in the portal, and that’s been an issue this season.

9) MARYLAND The Terps got a few big names, but it hasn’t translated into wins. Maryland is 11-14 overall and 3-11 in the Big Ten, and much of it is because the transfers. Former URI point guard Fatts Russell (13.6 ppg, 4.2 rpg, 3.9 apg) has put up numbers, but he’s been erratic. Qudus Wahab (8.2 ppg, 5.8 rpg) hasn’t been the force that he was at Georgetown. Ian Martinez (2.9 ppg) hasn’t done much since coming from Utah, while Xavier Green hasn’t helped much since arriving from ODU.

10) ST. JOHN’S Johnnies fans were ecstatic when Mike Anderson revamped a decimated roster via the portal, but it’s been underwhelming. Vermont transfer Stef Smith averaged 13.6 in the America East and was a big-time shooter, but he’s only putting up 6.3 points. Joel Soriano put up big numbers (10.4 ppg, 9.2 rpg) for a crappy Fordham team a year ago, but is just a solid piece in the Big East, averaging 6.0 points and 5.6 rebounds. Rutgers transfer Montez Mathis (8.6 ppg) and ex-Purdue guard Aaron Wheeler (9.8 ppg) have both been solid, but the group hasn’t done enough to help Julian Champagnie.
Reactions: WarEagle2727 and lurkeraspect84

Looks about right. Kessler has been amazing
Reactions: WarEagle2727

Tonight we are all Terps.
Thank you for your support 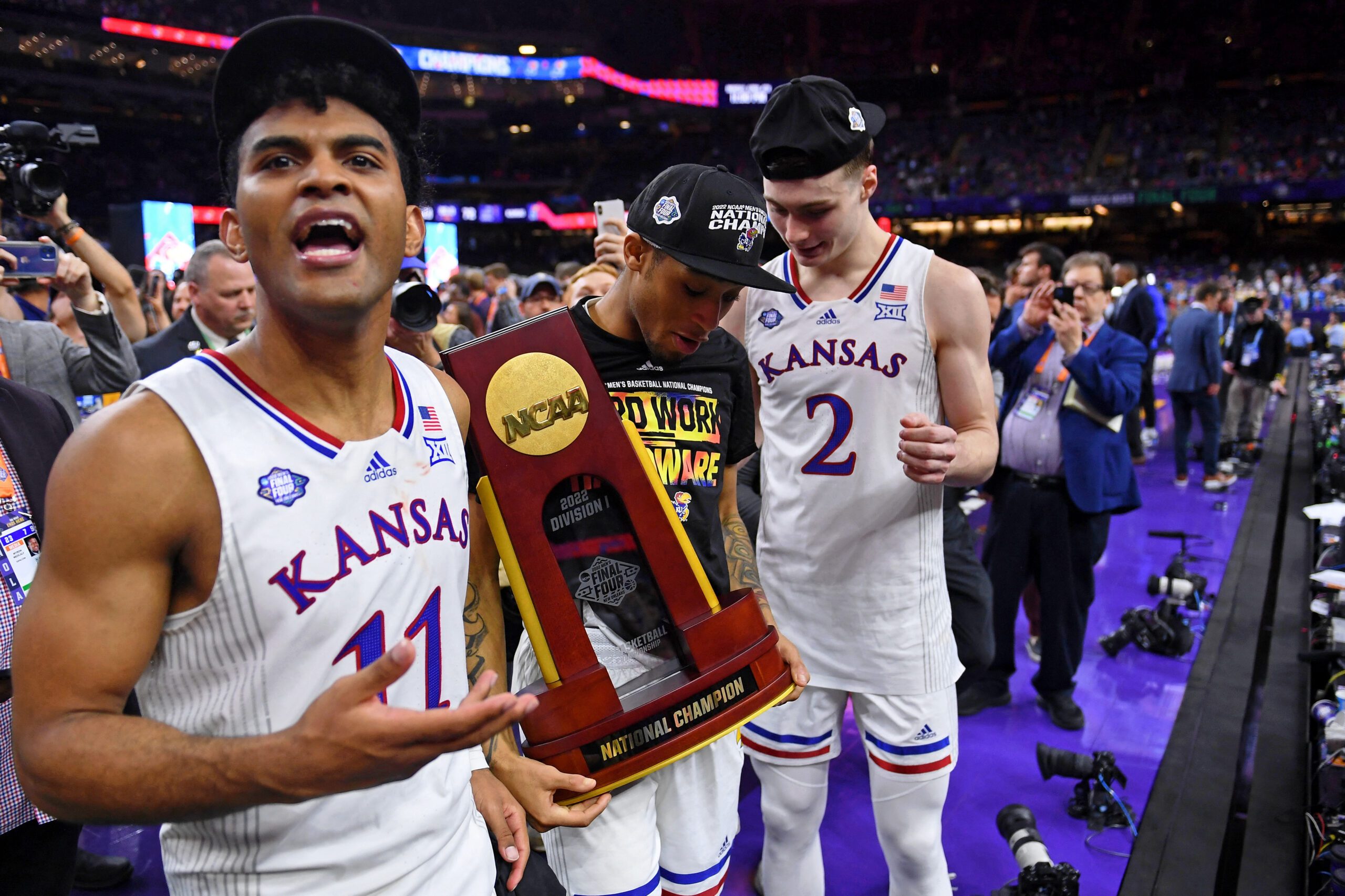 Reactions: KisteK
You must log in or register to reply here.

Rumor Mill: The latest news and notes from the Transfer Portal