List some games that one of your teams or one of the players...

1. Jodie Meeks hangs 54 on Tennessee at Tennessee. Breaks Dan Issels single game scoring record. They were all over him and he still didn’t miss.

2. Tayshaun Prince starts out the game at Rupp against UNc with 5 straight 3’s. The last one was just a couple steps over half court. #HesGotThePuppiesSetOffTheBus

3. In 1996 UK puts up 86 points in the first half against LSU. Still to this day the best team performance I’ve ever seen.

4. Malik Monk scores 47 on UNc and leads us to a win. Kid had no fear! #ColdBlooded #Dagger

2. Elston Turner, the kid from Texas A&M that came into Rupp their first year in the SEC (I think) and scored I wanna say 40 points. Beat UK and got a standing ovation from the Rupp crowd. Kid was on fire.

3. Jason Williams (White Chocolate) brought his Florida gator team into Rupp in 98 and he put on a show.

The ncaa tourney game against WVU in 05 was a helluva game. They had pittsnoggle, herber, and many other sharp shooters. Got up by like 20 in the second half and every time we would get a little closer they would bury another three. Then finally we wore em down or they got cold and we started making some shots led by Larry obannon (had a helluva game), Francisco Garcia, Taquan dean, and Ellis Myles. One of the best games I’ve ever seen (helps my team won)

The bad: we lost a 5OT game against ND where Russ smith had the ball in his hands with the game tied and the shot clock off at the end of regulation and like 3/5 of the OTs and he couldn’t make a play, either missed a wild shot or turned it over smh and we finally ran out of gas and lost in the 5th OT So frustrating to watch at the time lol. Had a guy who was just known for getting buckets but he never was very clutch and he couldn’t get one when we needed it like 3-4 times in a row at the end of regulation and through the multitude of OTs. He actually had a good game stat wise besides the turnovers, but hell when u play 25 extra mins I imagine most everyone for both teams had a pretty nice stat line.
Reactions: Scotty00
V

Oh and we lost to uva last year up 4 with Like 2-3 secs left. Fouled ty Jerome shooting a three (why perry why) it was a terrible call tho perry just stood there and had a hand up and Jerome jumped into him kinda there wasn’t much contact but alas they called the foul. And the worst part is we woulda won the game if all our players woulda just left the court and let uva do whatever they wanted down 4 but anyways in case u missed it He made the first two, missed the third, but we knocked it out of bounds with .6 seconds left and they inbounded to hunter and he buried a three at the buzzer. And if that’s not bad enough, we went from a virtual lock to make the tourney with a win (uva mighta been ranked 1 at the time) to goin to the effin NIT the year padgent was interim coach after Pitino was fired errrrrrrrr resigned right before the season when the fbi/Bowen stuff broke.
Reactions: jhmossy and Scotty00

Beat Duke and UNC on back to back nights on Tobacco Road to win the ACC Tournament. (2012)

Blew out Gonzaga in NCAA Tournament (2018)

Multiple wins over #1 Duke or very highly rated Duke, including ending a long winning streak by #1 Duke in 2002, and should've SWEPT #1 Duke in 2006 if not for the worst officiated game in NCAA history. No really, it was. And nothing even comes close.

Beat #1 UF in the middle of their two National Championships. Actually beat them back to back years during their greatest run ever.

Here's a moral victory - Came within 5 points of knocking off undefeated #1 UCLA in the NCAA Championship Game. This was in the midst of UCLA's NCAA record 88-game winning streak, and it was the closest anyone came to beating them that entire season. It was also a virtual home game for UCLA with the game in LA. At one point FSU led them by 7.

Lost to a bad Pitt last year when we were highly ranked. Didn't help that they got 46 free throw attempts. Pitt then went on to lose their next 13 games in a row.

Lots of blowout losses to Duke, UF, UNC when we sucked in the Steve Robinson days and early Ham days.

Lots of mid-major losses, Mercer, Northeastern, Hofstra, Furman, Cleveland State, Western Carolina, Corpus Christi, too many to count. Also lost to both Harvard and Princeton in the same season a few years back.
Last edited: Jan 13, 2020
Reactions: lurkeraspect84 and Scotty00

Kentucky scored 86 points in the first half against LSU? What in the world?! Was there just zero defense at all?

GE Nole said:
Kentucky scored 86 points in the first half against LSU? What in the world?! Was there just zero defense at all?
Click to expand... 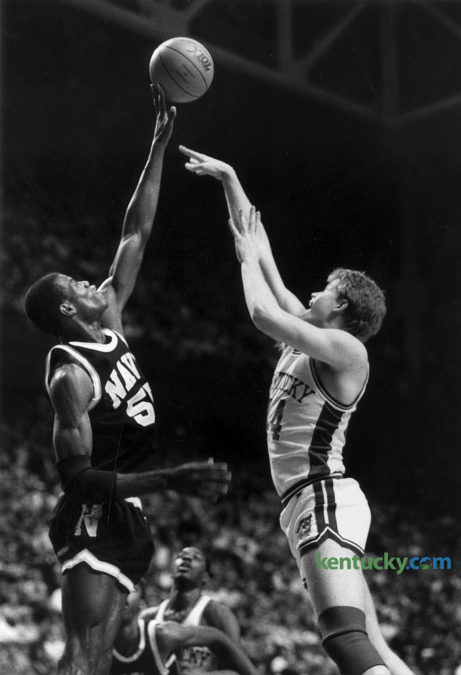 Navy’s David Robinson blocked a shot by Kentucky’s Rob Lock on Jan. 25, 1987, at Rupp Arena. Robinson finished the game with 45 points and 10 blocks, both Rupp Arena records. He also had 14 rebounds, giving him the only triple-double by a men’s college player in Rupp history. He was so good that Kentucky, its coach, Eddie Sutton, and ABC analyst Dick Vitale gave him a standing ovation when he exited the game. The 7-foot-1 center blocked layup attempts — and even a three-pointer — and scored 12 of Navy’s first 14 points and 19 of the first 23. Ten of those points came on dunks. The halftime score was UK 40, Robinson 21. “He’s the best I’ve ever played against,” Lock said. “I thought I was a pretty good defensive player, but I couldn’t defend him at all. I was lucky he scored only 45 points.” Herald-Leader Archive Photo
Reactions: GE Nole 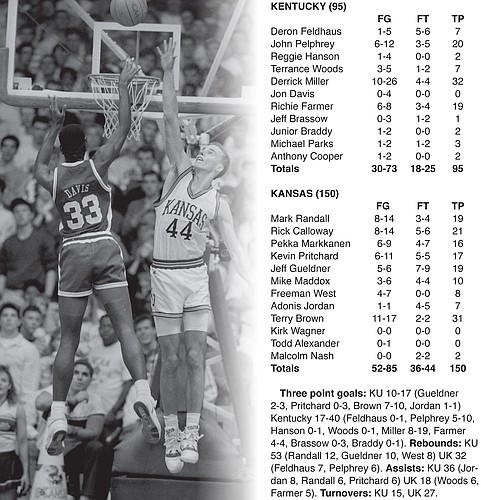 Did you get that package yet?

lurkeraspect84 said:
Did you get that package yet?

You sending me something?

Better not be illegal. lol

schoonerwest said:
You sending me something?

Naw man, you're going to like it.It''s perfectly perfect. Just got off the message chat with my BIL, it's on it's way.

Naw man, you're going to like it.It''s perfectly perfect. Just got off the message chat with my BIL, it's on it's way.
Click to expand...