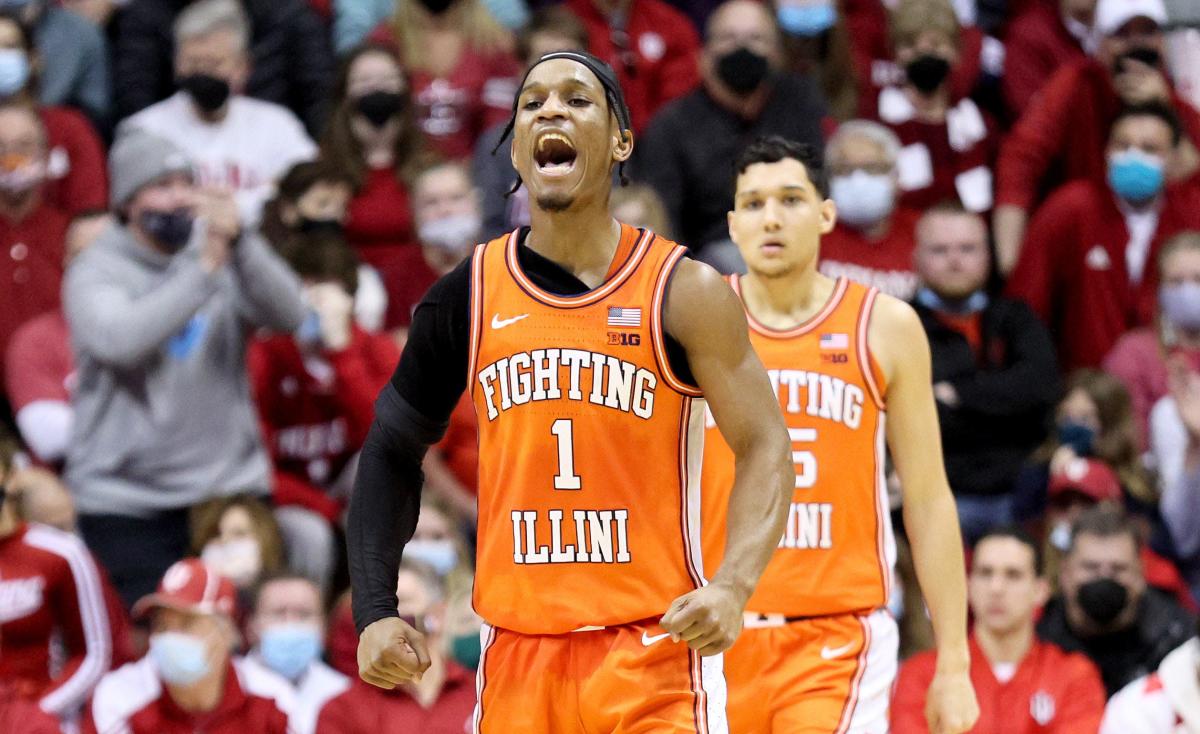 
The men's college basketball season has officially entered the make-or-break month of February when teams either surge into winning streaks or plummet ahead of March Madness.
Saturday was jam-packed with pivotal conference clashes that further shaped league races and affected projected NCAA Tournament seedings.

Kansas delivered a statement victory over Baylor to take control of the Big 12 race in a top-10 showdown, while also bettering its odds at landing a No. 1 seed on Selection Sunday. In coach Mike Krzyzewski's final road clash with North Carolina, Duke took care of business with a 20-point blowout to stay in command of the ACC. And in the Big Ten, Illinois built its lead in the conference race by escaping Indiana on the road.
A look at Saturday's biggest winners and losers:

No. 18 Illinois. The Fighting Illini (17-5, 10-2 Big Ten) aren't as talented as last season's team that garnered a No. 1 seed in the NCAA Tournament, but this Brad Underwood-coached squad is starting to look the part as a dark-horse Final Four contender. Illinois got 23 points from veteran guard Trent Frazier in a 74-57 win over Indiana – just a sign of the group's overall depth. It's not easy to win on the road in the Big Ten, and Illinois showed its mettle. Kofi Cockburn (17 points, eight rebounds) continues to have an All-American campaign.
No. 6 Duke. The Blue Devils (19-3, 10-2 ACC) gave coach Mike Krzyzewski a memorable sendoff at the Dean Dome in his last road game at North Carolina. Duke bulldozed past a bubble team in North Carolina 87-67 and was fed by freshman A.J. Griffin's 27 points. Behind Griffin and Paola Banchero, Duke's freshmen have blended nicely with a batch of returnees to give Coach K a youthful squad that gets better and better. The Blue Devils also stayed out front in the ACC title race with the road win.
No. 10 Kansas. The Jayhawks (19-3, 8-1) came out firing on all cylinders and jumped out to a 20-point lead early in a 83-59 win over No. 8 Baylor. Not only did KU take firm control of the Big 12 Conference title race by handily dispatching the reigning national champions, but now this team is inching closer to contention for a possible No. 1 seed on Selection Sunday with its overall credentials. Coach Bill Self's group does a lot of things right, and this team is extremely deep, led by the backcourt of All-American candidate Ochai Agbaji and veteran Christian Braun (18 points apiece Saturday).

Kansas Jayhawks guard Christian Braun (2) celebrates with teammates after scoring against the Baylor Bears during the first half at Allen Fieldhouse.
No. 21 Texas. After Texas lost to Texas Tech in coach Chris Beard's homecoming earlier in the week, the Longhorns (17-6, 6-4) came out and played like the talented team its capable of being in a dominant 63-41 victory over No. 22 Iowa State. Texas was absolutely smothering on defense, forcing 18 turnovers and 13% shooting from three for the Cyclones. Marcus Carr is starting to come into his own as the player who was heavily hyped as the top-rated transfer of the offseason from Minnesota.
Wake Forest. The Demon Deacons (19-5, 9-4 ACC) are coming on strong as contenders in the ACC and picked up an important win over Florida State. Jake LaRavia had a near triple-double with 18 points, 13 rebounds and nine assists in the 68-60 victory over the Seminoles. That keeps Wake Forest at the top of the pack in the ACC title race to showcase second-year coach Steve Forbes fast work with a program facelift.
No. 1 Auburn. It's hard to consider this outcome being in the winners column since the Tigers (22-1, 10-0) barely escaped a huge upset against the worst team in the SEC. Wendell Green Jr.'s tie-breaking layup with four seconds left saved the day in a 74-72 win over Georgia for Auburn, which had just tied Gonzaga in the Ferris Mowers Coaches Poll top 25 at the No. 1 team this week.

No. 4 UCLA. The Bruins (16-4, 8-3 Pac-12) went down to the wire in a triple-overtime thriller, before falling to lowly Arizona State 87-84. The court-storming loss for UCLA will serve as a significant résumé stain when it comes to Selection Sunday, bumping the Bruins down to the projected No. 4 seed range. When UCLA isn't hitting from three-point range – and its opponent is – momentum becomes more difficult to manage in tight games. And the defensive discipline driven by coach Mick Cronin was not on its A-game in this setback.
No. 13 Michigan State. The Spartans (17-5, 8-3 Big Ten) fell out of the conference standings lead with an ugly 84-63 loss to Rutgers on the same day Illinois picked up a big win. Even though this game was on the road, it was an opportunity to make a statement in the Big Ten. Coach Tom Izzo's group showed some more growing pains in this loss after barely escaping bottom-feeder Maryland by two points earlier in the week.
No. 17 Connecticut. The Huskies (15-6, 6-4 Big East) had a tough task in taking on Big East kingpin No. 12 Villanova on the road in an 85-74 outcome. But it was also a missed opportunity for UConn to pick up a résumé-boosting victory and separate itself in a crowded league race. Coach Dan Hurley's group has now lost two in a row, after dropping an unexpected home game to Creighton earlier this week. This program is on the cusp of becoming a contender. Saturday was proof UConn isn't there just yet.
No. 23 Xavier. After vaulting into the Coaches Poll top 25, the Musketeers (16-6, 6-5 Big East) just suffered a résumé-staining loss to Big East doormat DePaul 69-65. It was the first loss for Xavier against a non-ranked opponent this season. This happened with DePaul's leading scorer Javon Freeman-Liberty out of the game. The loss pushes Xavier more towards the middle of the pack in the Big East.
Scroll back up to restore default view.
No. 19 Southern California. The Trojans (19-4, 9-4 Pac-12) had a chance to make a statement in the Pac 12 against league leader No. 5 Arizona, but couldn't make enough shots (7-for-30 from beyond the arc) to stay close in the Wildcats' 72-63 win. USC's defense was strong in this game, but the offense was too stagnant – a negative trend carried over from previous games that questions whether this team's stock will rise or fall in February before March heats up.

Michigan. The Wolverines (11-9, 5-5 Big Ten) clearly have fallen off the rails after being the preseason No. 6 team in the country in November and now middling around .500 here in February. Saturday's road game against No. 3 Purdue was an opportunity to change the narrative, but an 82-76 loss – in spite of Hunter Dickinson's 28 points – just reaffirms Michigan's not the upstart team it was last year under coach Juwan Howard.
You must log in or register to reply here.

College Basketball Board May 9, 2022
HawksJ